Posted on December 14, 2011 by richardwbennett

THE COURT: Good morning. Be seated.

MS. MacINNES: Your Honor, this is State versus Lawrence W. Bennett, the Cause No. 91865.

Present in court are Mr. Bennett, his attorney Jerry Joshua, Karin Portin from the Probabtion Office, and I am Nicole MacInnes representing the State of Washington.

Here we are on a sentencing on the charge of theft in the first degree to which Mr. Bennett entered a plea of guilty on the 24th of December 1980.

The State’s recommendation in this case is that Mr. Bennett be given a suspended sentence of ten years on condition that he serve one year in the King County Jail; that he be on supervised probation and have no law violations, pay costs and restitution which is set at approximately $5,800. I don’t know how accurate that figure is, and I am sure that we can get a specific and up-to-date figure on it.

I would indicate to the Court that at this time that I have recently spoken to the Prosecuting Attorney in San Jose, California. There is a matter pending in California regarding the theft of a Mercedes-Benz, and that charges have been filed and are pending in California; that they are not certain at this time whether Mr. Bennett will be extradited on the matter, but it is something that they are certainly contemplating.

I think it is important for the Court to be aware at this time that there are still pending charges in another State besides the matters that were referred to in Ms. Portin’s report, the Arizona situation and also matters in Canada. It is obvious that Mr. Bennett has been very active around and about the Western United States; that this has been presented in the Defendant’s presentence report. This may be a first felony conviction, but certainly the indication is very strong that he has been involved in a lot of complicated maneuvers around and about, and I think that the Court should look very seriously at the activity that he has apparently been involved in over the years and, I would submit, will probably continue to be involved in if something significant is not done by the courts.

THE COURT: Thank you very much, Ms. MacInnes. You are the probation officer?

MS. PORTIN: Yes, your Honor. When I did my presentence report I made a recommendation that Mr. Bennett be sentenced to prison, because I did not feel that he was supervisable on ordinary probation, because of his ability to be quite creative in scheming, and the Intensive Supervision Unit has denied Mr. Bennett in their program because of the California matter. They don’t wish to supervise someone who goes to another state. So he is not eligible for that program. I would like you to be aware of that.

“… he had been arrested for outside of a potential forgery and assault with a deadly weapon in California… and the matter in Arizona I am quite familiar with.

It alleges that after a disorderly conduct. He was one week later arrested for assault for allegedly hitting a five-month pregnant woman…”

“… sometime after that it was alleged that this same woman was a victim of a vicious attack by Mr. Bennett and another person,” to which Mr. Bennett plead guilty with an Alford plea.

“Basically the victim right now is in a mental institution. That trial in Arizona has been scheduled for May 27th.” in Phoenix, Arizona.

“It is in the report that he was with his son for a year against her wishes, and she is highly afraid that it is going to happen again…”

“… I can tell his wife that if something like that happens again he can go to prison here on this order.: 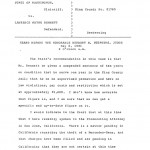 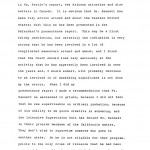 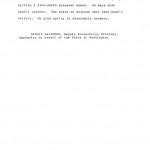 (Admin note: See remainder of this original file, get a copy to call your very own, and the rest of the documentation and preceedings on file at the Court)