RESPONSE TO THE SELF ADMITTED PATHOLOGICAL LIAR AND TWISTED RICHARD W. BENNETT AKA LAURENCE W. BENNETT

THIS STATEMENT WAS POSTED BY BENNETT ON JUNE 19, 2013 ON HIS SLIME SITE;

BENNETT QUOTE:  In Caps “I believe, based upon the interaction with him, some of the caregivers and some of the absolutely insane answers and rationalizations he posted and which I have memorialized, he drove his own mother into such distress that she lost her will to live and to deal with him anymore.  She simply gave up.  Look at this face.  Read the record(s).  What do you think?” END OF QUOTE 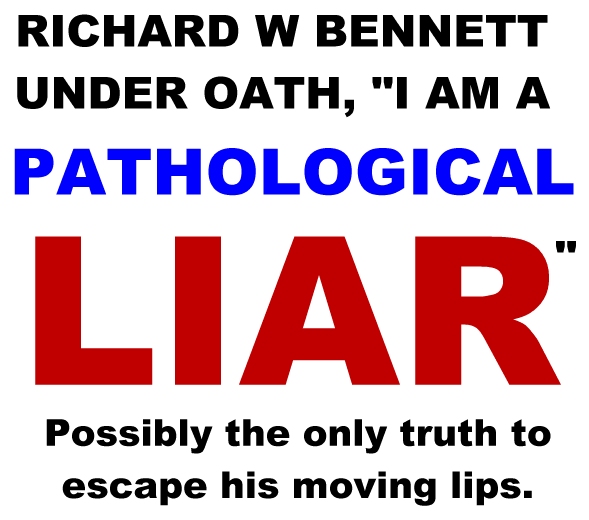 I was with my Mother the day she died as I had been with her the entire time she was in the hospital.  Mom didn’t call anyone a few days before she died because she wasn’t able to you Twisted Son of a Bitch.

You have the balls to talk about my my Class Four (4) Misdemeanor and I never served one day in jail when your a FIVE TIME CONVICTED FELON THAT’S DONE OVER ELEVEN (11) YEARS IN PRISON for sucking the wealth out of unsuspecting people and ruining their lives you low down puke!!  I’m going to find you Bennett…You won’t find a rock big enough to hide under.  My children and family and your once daughter don’t give a damn what you have to say but believe me, I won’t rest until I see you behind bars you low down scum.

You base all you shit on one person who I can prove to be a liar just like you.

This is a Notarized Letter from my mother to Richard Burke Dated December 27, 2010 and is in my attorney file.

Dear Mr. Richard W. Burke,       My son told me that you have filed a guardianship with the Probate Court here in Canton.  I am very upset that you did that and you didn’t have the right to.  I told you in a letter that you and Diane Petrella were both terminated as my Attorney and Power of Attorney back on November 29th and that my son was back as my Power of Attorney on November 27th but you won’t quit bothering my son and me about this.  I want you to stop this because it is my decision and I told you in the beginning that it was temporary or could be temporary depending on my sons health.       You had me sign papers that you never asked me to read first or you read to me to make sure I understood what they were all about but just had me sign them and then had them Notarized later.  The Power of Attorney was Notarized in your office in Akron, Ohio and you know I have never been there.  I do not trust you or Diane and I will never accept you as my attorney let alone my guardian.  I think you did things that were not honest with me and changed things that I didn’t ask you to change like my New York Life account to a Revocable Living Trust and I have never seen those papers.       My son Robert P. Bennett will represent me as he has done before and has my permission to do anything he has to and stop you for continuing to bother and upset me.  I am an 82 year old woman and what you are doing to me is hateful and harmful to me.       My son has my permission to hire an Attorney of his choice to do whatever is necessary to stop this and pay for the Attorneys cost from my funds.  My son has always been honest with me and I would never accuse him of stealing but has stopped people from doing it.  I will not pay any of your costs for doing this so don’t send a bill.       I want you and Diane to stop this at once and follow my instructions in the letter I sent you back on November 29, 2010.  I will be faxing this letter to you today.

NOTARY: Personally came before me this 27 day of December, 2010 the above named Elizabeth M. Swanson to me known to be the person who executed the following instrument and acknowledged the same.

So with this letter I will say to Bennett on more time–I don’t give a shit what you think or what you want to think or want to believe is the truth because frankly none of us gives a damn.  You are the most vile and sick MF that has ever walked this earth and come next week I meet with the Federal Prosecutor and the FBI to turn over your file and mine and we will see where we end up.  Until then you can take your Slimy Smear Site and stick it up your Slimy Ass—GET IT!!!!