RICHARD W. BENNETT AKA WAYNE BENNETT AKA LAURENCE W. BENNETT REACHES A NEW LOW BY ATTACKING A FAMILY MEMBER IN CANADA WITH THE MOST SADISTIC AND DESPICABLE COMMENTS OVER THE DEATH OF HER FATHER AND WITH HER PERMISSION I AM POSTING THOSE STATEMENTS MADE BY THIS PSYCHOPATHIC LOW LIFE PUKE…

“I have received texts from Kim Piercey Bennett commenting on that I have had a few friends disassociate. “looks like ur losing friends on Facebook. LOL “AND” How many more people will say bye-bye.” Oh well. I still won’t lower myself to respond to this. If you leave, good bye. If you stay, welcome.” 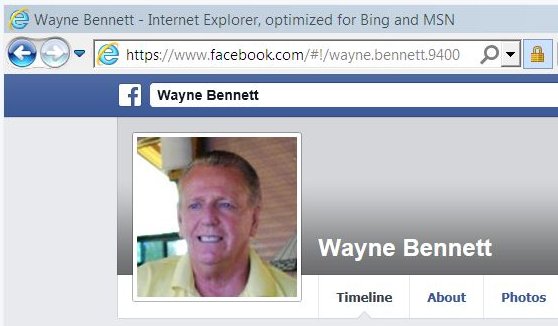 But then Bennett in full form after just saying “I won’t lower myself to respond to this” lashes out with the most despicable and one sided lying attack on Kim and puts this very personal and harmful comment on full public Facebook for everyone to see; QUOTE:

“OH BTW, that is Kim Bennett-Piercey that when her Father was dying I left everything in my world to be by his side as I was the first AND only relative her mother called. I gave everything Tom needed–money and friendship and love–to help him get through the brain tumor that was killing him. I stayed in Halifax until he was capable of traveling home to Newfoundland before I left to go back to the USA. It was later that I got a call that he might not make it much longer, so I drove from Seattle to St. John’s in my car that he wanted a ride in before he passed to be at his side knowing he would hang in until I got there.”

Good God how heartless to say that Tommy wanted a ride in his fricken car over being with his family knowing that he was dying. This is the way of a psychopath and pathological liar—just say what you want people to read—sounds very familiar to me.

“Bradley and his son Tommy and Brenda and Nolan and many others knows the true story. I spent every moment by his side with his Mother–my aunt–Jean until he passed. I held his hand with his mother in his last moments. Thanks Kim. You cannot deny this. It is true. You are passing along things that are NOT terue and if anything were true I would admit it as I always have. Shame on you.”

Bennett was not there when Tommy died but had left Newfoundland over an argument he had gotten into with Kim that upset her deeply. Bennett after posting these rotten comments then tells Kim that he’s has sent all of the comments she has ever made to him to the Halifax Police accusing Kim of slandering him and she was going to be in serious trouble with the law.

Bennett then tells her how he maxed out his credit cards and funds to give them a certain amount of money that he hadn’t given and later said that he wanted it back.

Bennett was this a guy that wanted to make everyone believe he was this wealthy Do Gooder but yet wanted the money back because he maxed himself out. This was also at the same time where he ripped off an elderly 78 year old man of over a $100,000.00 dollars of his life savings and ended up in prison over the “theft by deception”. This poor old man, John Boyd never recovered from the loss and Bennett never paid it back along with all the other people he has ripped off all his adult life.

Bennett is a sick twisted piece of garbage that lives in a cesspool of lies and deception and would steal from anyone and if he was so wealthy and was suppose to have given thousands and thousands of dollars for AIDS and Cancer research and over a $1,000,000.00 to help drug addicted young people then why would he be worried about a few thousand dollars to help family and then want it back??? Why wouldn’t he even help his own children all their lives??? Because Bennett is the biggest liar and rip off artist out there looking for his next victim!!!

Bennett sinks to a new low by putting out such a disturbing comment for everyone to see just to hurt the family he says he cared for—-BULLSHIT!!!

One thought on “Felon’s International Facebook Attacks on Family Members”