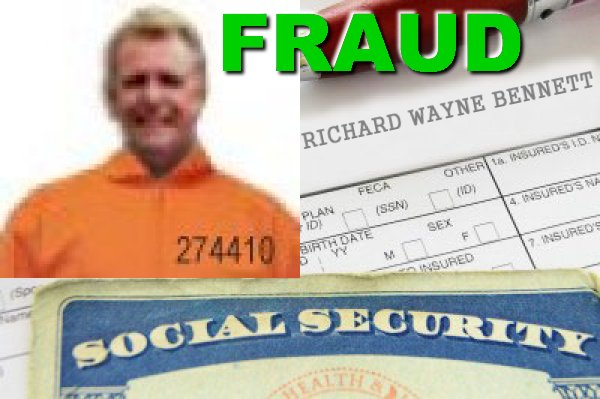 In my continuing efforts to make people aware of who Richard W. Bennett AKA Laurence W. Bennett is and the extremes he will go to and lie and/or commit Fraud:  This is a response from the SOCIAL SECURITY ADMINISTRATION Dated May 19, 2004 Claim Number:  571-66-3959 DI

After a careful review of your case, we have determined that you not not eligible to receive Supplemental Security Income payments under the provisions of Title XVI of the Social Security Act.  The rest of this letter will tell you more about our decision.

Why we Can’t Pay You

*  To qualify for Supplemental Security Income (SSI), you must be a      United States (U.S.) citizen or national, or be in one of the alien      categories listed later in this notice.

Our records show that you are not a U.S. citizen or national or in any      of the alien categories for May 2004 on.

The letter goes on and I will not waste to much time on this but the reason for this decision was that Richard W. Bennett AKA Laurence W. Bennett was denied Social Security Disability Income because he used an illegal name that Social Security had no record of.  Believe it or not, he then tried to blame my mother for this.

He wrote a note across this notice to my mother saying: Original you were to mail—Thanks for my original birth certificate and your typical lies about just anything and everything—You have my alien card(s) etc. and you know it.

We became U.S. Citizens back in August, 1960 so we never had to carry alien cards (green card).  Laurence Wayne Bennett joined the US Marines in 1964 and was listed as a US Citizen.  I joined the US Navy in 1965 and was listed as a US Citizen but what he wasn’t listed as is Larry Swanson and that is where the problem lies.  He lied to the Social Security Administration as to who he was thinking he could slip this through the cracks but it didn’t happen.  If Social Security knew that he did this to fraud them into awarding him benefits that he didn’t qualify for, he could be charged with a crime and maybe I will just report that.  There is no Statute of Limitation on trying to fraud the United States Government!!!

This is another follow-up on Richard W. Bennett AKA Laurence W. Bennett.  This is a response letter to a letter supposedly received from a R. Swanson to the Government of Newfoundland and Labrador and reads as follows:

As requested in a counter request from you, we enclose one marriage certificate/s of Jack R. Swanson and Elizabeth M. Bennett.

The problem with this letter is that my dad never sent the request in the beginning asking for a certificate of marriage because he and my mother had given me the original to keep in my records file but in fact requested by Laurence Wayne Bennett pretending to be a R. Swanson.  Also, my dad never went by R. Swanson or Richard Swanson but by Jack Swanson or Jack R. Swanson.

My mother wrote a note over this letter stating: HOW DARE YOU–DON’T YOU EVER USE THE SWANSON NAME NOT EVER O.K., BUT AS WE KNOW HE IGNORED MY MOTHER BY USING THE NAME LARRY SWANSON IN FILING FOR SOCIAL SECURITY BENEFITS IN MAY, 2004

In this letter he fraudued the Newfoundland Government pretending to be a R. Swanson from Aberdeen, WA. where my family have never lived and was never their address!!!

Now this is a man that accuses people of being dishonest or liars or frauds but has a history as long as your arm of deceit,lies, fraud, theft and the list goes on.  This Richard W. Bennett AKA Laurence W. Bennett is one totally sick individual….